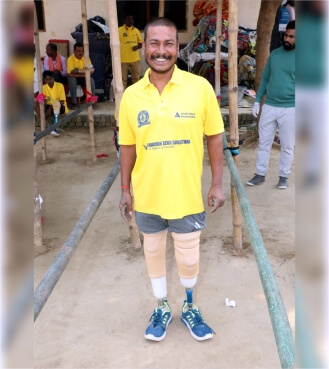 Dinesh is not crawling anymore!

This is the agony of a 36-year-old man. Dinesh Nishad, from Maharajganj, Uttar Pradesh, was living happily with his family of six and providing for them by truck driving. He told us in his story that in 2016, after being bitten by a poisonous mosquito, a minor blister appeared on his left leg. Eventually, it turned into a wound. Over time, his leg began to decay, and during treatment, his left leg had to be amputated to stop the spread. He had to pay a lot for treatment. The family fell into debt, and he had to quit working after losing his leg. After some time had passed, he returned to work because there was no one else in the family to support and he had seen how his family was struggling.

His miserable condition worsened in the year 2021 while he was in a hotel in Kathmandu. Destiny repeated the story, and a mosquito-like insect attacked him on the other leg. A week later, he experienced a burning sensation in that area. He took it to the doctor in Gorakhpur, where he was informed that it had caused gangrene on his right leg and that the leg would have to be amputated. No one could believe that. The whole family sank into mourning, and in the end, he had to lose another leg. Fate was so cruel that it compelled him to crawl. He felt like he was living in hell. Every day was a struggle for them until they found out about the free limb distribution camp being held on October 30, 2022, by Narayan Seva Sansthan. Dinesh arrived at the camp, where his measurements were taken for prosthetic limbs. This gave him scant hope. After a month in the next camp, he received artificial limbs as well as training on how to stand, walk, and run with them.

He also praised Sansthan for its humanitarian work for people with disabilities. He added that he had been unable to stand or walk for nine years but is now back on his feet and cannot express his gratitude to Sansthan enough.