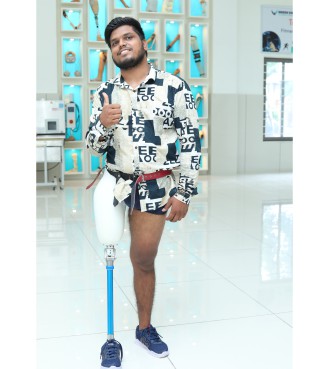 Rakesh's life got a new path!

Sometimes nature does such a thing that a person breaks down. In such a situation, people who work with enthusiasm even after being disappointed, they get some kind of support. Something similar happened with Rakesh Patel, a resident of Muzaffarnagar district of Uttar Pradesh. In 2019, he was very upset due to sudden pain under the knee of his left leg. Three or four months passed, the pain was not subsiding. Then on 20 March 2019, after getting tested at a nearby private hospital, it was found that the leg vein was blocked. Then after the treatment, the doctor injected the leg. But after a month, the condition of the foot appeared very bad, the foot turned black and rotted from inside. Seeing the condition of the foot, he showed it to many hospitals, but doctors from all over the place said the same thing that the leg would have to be amputated. If the leg is not cut then it will be very difficult later. He was shocked to hear this, as if his whole life had ended.

Then on October 2020, he went to VisvaBharati Hospital in Meerut for treatment. Here the doctor operated and treated him by amputating his leg.Then after two months, again called for dressing, then while examining the foot, two or four stitches were pressed by the nursing staff, which worsened the condition of the foot. Then two months later, on February 2021, in the government hospital of Muzaffarnagar, the leg had to be amputated above the knee. It was as if a mountain of sorrow has fallen on the family. Rakesh used to work as a laborer to feed eight members of the family. But now the situation of the family has become even worse. After this, in 2021, he got a prosthetic leg from Ambala, Haryana, whose weight was eight to ten kg and it was very hot inside, which caused a lot of trouble in walking. Because of this he could wear it less. Some time ago some people of the village told about NarayanSevaSansthan in Udaipur Rajasthan that free polio operation is done here and artificial limbs are installed. As soon as he got the information, he came to the institute on 19 July 2022. On 20 July the feet were examined and measured and on 23 July a special prosthesis was fitted for free. Rakesh says that due to the reduced weight of this leg, now I am able to walk comfortably and am very happy. Many thanks to the sansthan family!