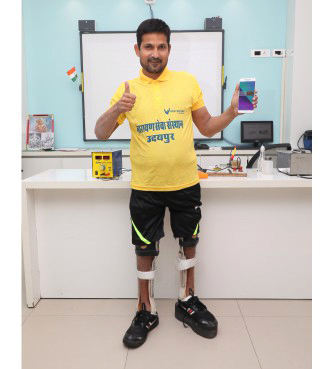 32-year-old Sohail, a resident of Ajmer, Rajasthan, was unable to walk since birth due to disability in both legs. The parents showed him to nearby hospitals but there was no satisfactory reply from anywhere regarding the recovery of the son. 32 years passed by carrying the burden of disability. The whole family was troubled by the condition of Sohail. Bad thoughts used to come to their mind; they didn’t know what to do and what not to do. They were tired of wandering in the hope of healing.

Meanwhile, information was received about Narayan Seva Sansthan. As soon as he got the information, he came to Narayan Seva Sansthan located in Udaipur, Rajasthan. Where the sansthan became Sohail’s support and after 2 successful operations he was put on a special caliper. Trained him to walk. To make him self-reliant, the institute connected him with employment by giving him mobile repairing training. Now he started earning by repairing the mobiles of neighbors and friends in the house. Sohail expresses his gratitude to the sansthan and says that the sansthan has made me able to walk again, now I will fulfill my dreams.